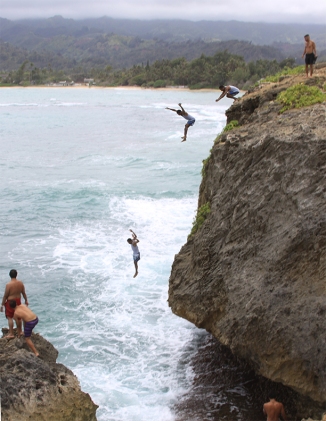 This is actually a composite of three separate photos I took of this young man jumping off a cliff on Oahu.

To see more of this week’s challenge, click here or here: H2O

While recuperating from foot surgery, I took advantage of the wonderful things our copious amounts of rain has done to the backyard. Last year’s drought made the yard look barren, but now everything is lush and green.

Doors of Saint Louis, Central West End poster available from Relish Cards & Gifts, 22 N. Euclid, St. Louis, MO. As a fundraiser, Bruce Shoults of the The Great Frame Up Central West End, asked patrons to enter their doors into a contest to be chosen to be included on the “Doors of St. Louis, Central West End Edition” poster. The chosen doors where photographed by me and the design based on a previous Doors poster (designer unknown)was developed by me in Photoshop CS4 into the poster seen below. 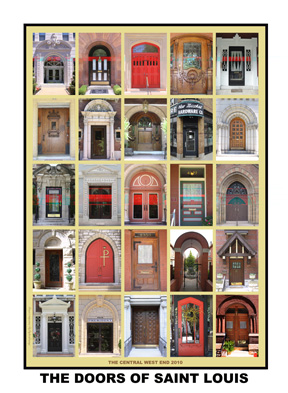 A good friend came to me and asked a favor. Her  friend had recently lost her mother and her parents wedding anniversary was coming up shortly. She had two separate  photographs of her parents, obviously taken back in the 1940s and hand tinted.  She wanted the two photographs to be merged as one.

This poster made using Photoshop and Adobe InDesign, was my final project for the Publishing Design class at St. Charles Community College. I made it to honor my son, Tom and he is depicted in the photograph labeled “Valor”. The photographs were taken by me at his live fire training for the St. Charles County Fire Academy and using Photoshop, I created each individual photograph to make it appear as though it were a polaroid photograph.

Several years ago, I had the privilege and pleasure of attending the National Center for Missing and Exploited Children’s Digital Forensic Imaging training on the campus of the University of Florida, Tampa. This was one of the best experiences of my life. Not only did I receive concentrated training in Photoshop, which I love, but the training was held on a beautiful campus in a totally beautiful part of Florida.

One of the things we learned to do was to reconstruct facial features of individuals, who for one reason or another, would not have been able to be depicted in their current state. We also learned how to age regress a person in a photograph which is not nearly as difficult to do as age progression which is also done at the National Center.

One of the other students in my class, whose abilities I could not hold a candle to, was Sarah Krebs, a Michigan State Trooper and forensic artist. Sarah agreed to pose for photographs for some age regression practice. One of the methods I have tried since my training, is  facial swapping. In this collage, I used a photograph of myself from 1971 (OMG LOL) and blended it with the photograph of Sarah. I also put a different shirt on her to more match the age I was going for. The name, Brianna Pez, is, of course, fictitious.

Here is a photograph of Sarah in her trooper’s uniform. You can read about Sarah’s abilities by googling Sarah. She was also profiled on a television show I watched not too long ago.

Last year my brother, Bruce, who owns the Great Frame Up in the Central West End devised a fund raising project to benefit local charities by producing a new Doors of St. Louis poster. About 20 years ago, the first edition of the Doors poster was made featuring doorways throughout St. Louis and over the years, this poster has been very popular with his customers. Bruce asked me to take the photographs and design the poster based on the original.

This is the finished product and is available for purchase from the Great Frame Up, 22 N. Euclid, St. Louis.

I created this collage using photographs I took of people attending the Biker’s for Babies ride in 2010. Each photograph was selected from its background and  a hue and saturation adjustment layer added. 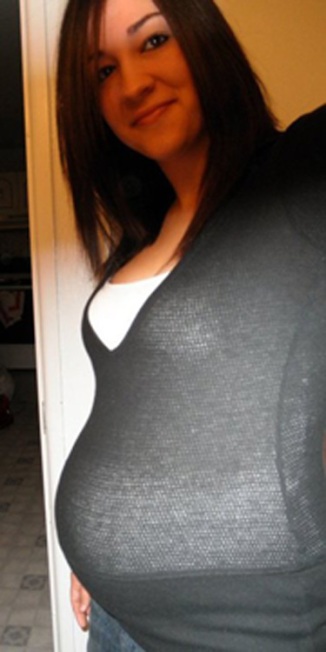 I was very excited when my brother’s children moved back to Missouri after having been gone for many years. I was even more excited when my niece moved in across the street from me with her new baby daughter. For her baby shower, I committed the Facebook sin of stealing a photography she posted.

I traced and colorized the photograph and used vector graphics and text to create a poster for her for the baby’s wall. 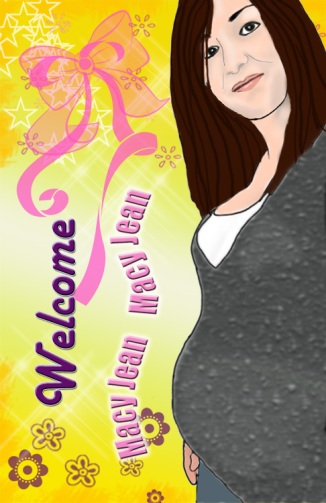 One of the hardest things to do in Photoshop or any image editing program is to make a good, clean selection. I know its something I always struggle with. I downloaded a trial version of Topaz ReMask3 and watching the tutorials, it seems to make  intricate selections involving hair and fur completely possible. I specifically downloaded the program for a composite I am doing for a friend. It is two separate portraits of her parents from the 1940s. She wants the parents put into the same photograph. The portrait is fairly pleasing, but I’m just not pleased with the hair selection, ergo the download of Topaz ReMask. I tried it on another photograph just recently taken of my new daughter-in-law, and I’m more more pleased with its results. I think it must be very important that the focus is crisp and not soft was it is in the 1940s photographs.  The attached is my second try using Topaz ReMask3.  Not perfect, but I can see it is definitely something I want to learn more about. 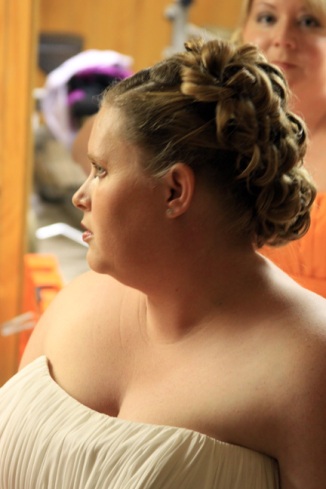 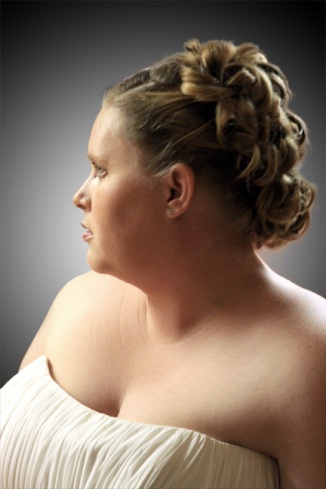