My grandchildren walking among the Flags of Valor

On the 15th Anniversary of the terrorist attack on 9/11, Forest Park in St. Louis hosted “Flags of Valor” on its iconic “Art Hill” on the grounds of the Art Museum. This large hill, normally used for sledding during the winter, became the breathtaking stage for 7,021 America flags, each flag representing one American soldier who has died since September 11, 2001. It is hard to describe the feelings I had when we first glimpsed the rows upon rows of American Flags. One such soldier commemorated is Sgt. Sean Cooley, the husband of my children’s cousin.  Each soldier’s name is indexed and the location of his flag is documented by row. As we were walking among the rows on our quest to find Sgt. Cooley’s flag, I couldn’t stop my  tears  as the realization hit me that each one of these flags represented a man or woman who sacrificed their life for me and whose loved ones will grieve them forever. It took a little while, but we were finally finally able to find his flag. 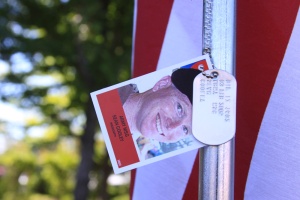 Sgt. Sean Cooley, 35, a member of the Mississippi Army National Guard and assigned to Co. B., 150th Engineering Battalion, 155th Armor Brigade of Lucedale, Mississippi was killed on February 3, 2005 in the Northern Babil Province of Iraq when his armored vehicle was hit by a roadside IED. Sgt. Cooley had been in Iraq just a little over a month. Back home in Ocean Springs, Mississippi, Sean was an emergency room nurse who was liked and respected by all. “Sean M. Cooley’s dedication as an emergency room nurse and kindness to his patients were obvious when surveys of patients came in. ‘Sean still has the most stars on the board, and he has been gone several months. Everybody loved Sean Cooley,’ said Darlene Phillips, a registered nurse who worked with him. ‘He just loved people and touched the lives of so many children who came through the ER.'”–From Legacy.com. I wish I’d known him.

To see more of this week’s challenge, click here or here.

To commemorate the 15th anniversary of the Sept. 11 terror attacks on the United States, America’s Heartland Remembers is putting 7,021 flags on display at Art Hill in Forest Park. Each one will have a photograph of a fallen member of the military killed in the war on terror since 9/11.